“They say we are old, could it possibly be?”

Posted on August 14, 2011 by Pocket Perspectives 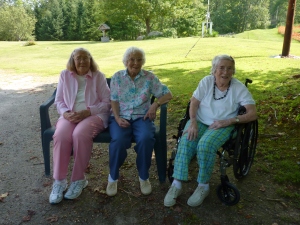 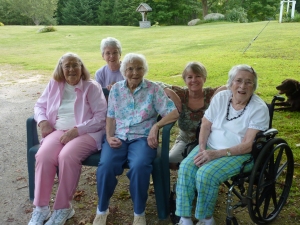 click on image to enlarge, for easier reading or click to open pdf file: They say we are old… 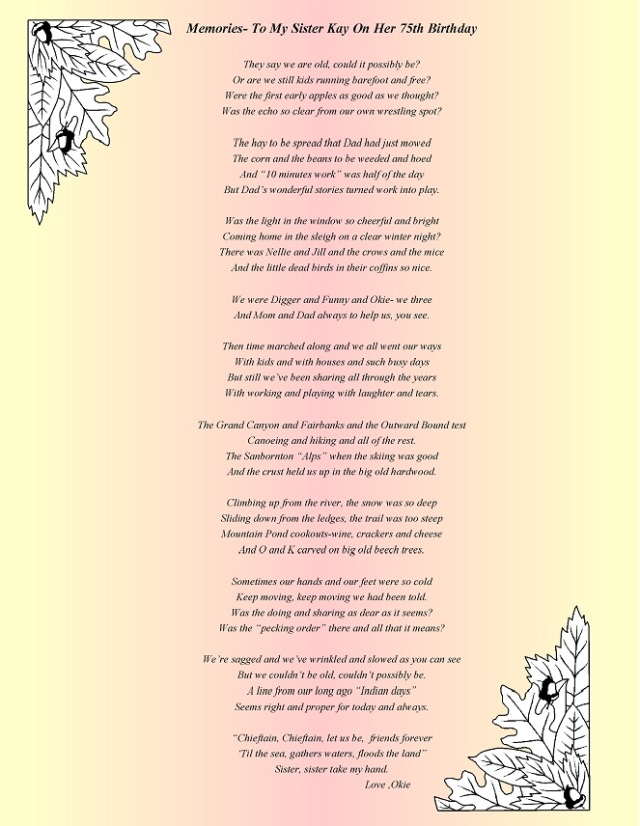 Explanations: Esther, Okie and Kay’s father, Frank Carleton,  drove them to school in a horse drawn wagon or sleigh. Nellie and Jill were the horses.(or maybe Nellie was a horse and Jill was the dog?)  They had neither electricity nor running water in their home. They had constant outdoor adventures on the farm…using imagination, playfulness, ingenuity and extremely high energy!!

Okie and Kay continued to be very athletically active well into their 80’s.  In their 60’s and 70’s, they went down to the bottom of  the Grand Canyon,  on Elderhostels to Fairbanks Alaska, (and Kay went to 50 or 60 more…usually hiking/canoeing/rafting/skiing… to various places in the world),  did a week long  Elderhostel winter Outward Bound survival week on the coast of Maine (ice climbing, sleeping outdoors in the snow in tents, backpacking, pulling supplies on toboggans, overnight solo etc)

The “pecking order” refers to Okie being the older sister and Kay being younger…Kay would be sent ahead to break a trail on their dozens of cross country skiing hikes….part of the pecking order.

Currently: Kay, Kathy/PocketPerspectives’ mother,  is recovering from  one  broken leg/hip, broken in April and then the other leg/hip broken in June. She had rods put in each leg  and is now happily  back in her lovely room, and lovingly taken care of,  at Peabody Home. Okie lives at a different assisted care facility, about 3 miles away from Kay……and is busy with a writing group, current events classes, TaiChi, and her beloved Smithsonian and National Geographic Magazines.  Esther, another writer,  lives with one of her daughters about 30 minutes away from Kay and Okie.

There is a newish blog with a few of Okie’s poems (many more to be added) at the blog listed on the right blogroll:  “94 and Still Writing” There is also another of Okie’s poems on this Pocket Perspectives blog;  “20 Steps Down the Hall”

8/19 Update:  I’m visiting my mother and Okie for a few days…I just showed Okie her poems on her own blog a few hours ago…she was clearly impressed….at a loss for words…especially that people from many places  had read her poems and appreciated them...she had my husband take a picture of the 2 of us….Okie and me…in.front of the monitor with her poems on there….and really was pleased. I might add that photo to her blog when I get better internet connections, 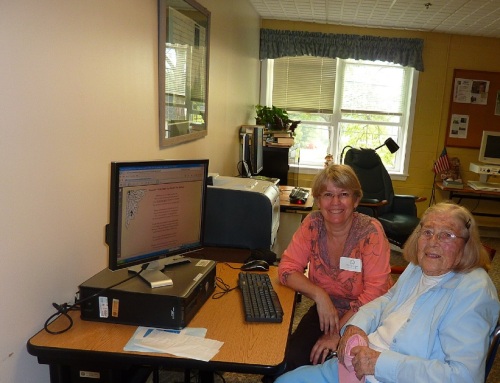 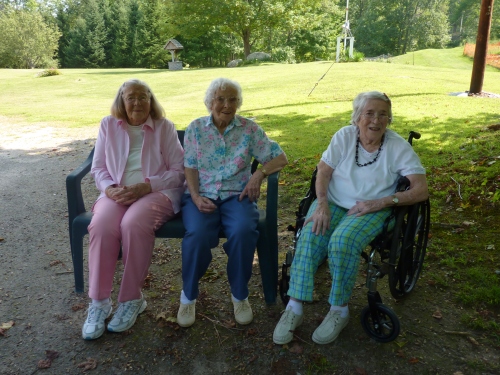 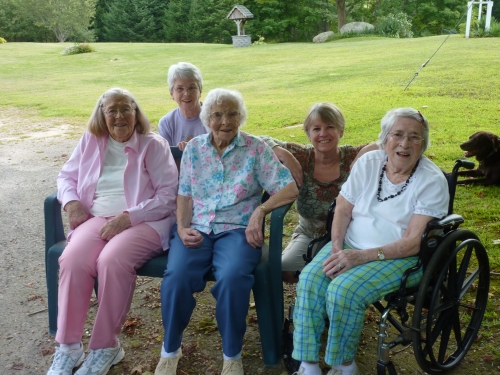 9 Responses to “They say we are old, could it possibly be?”